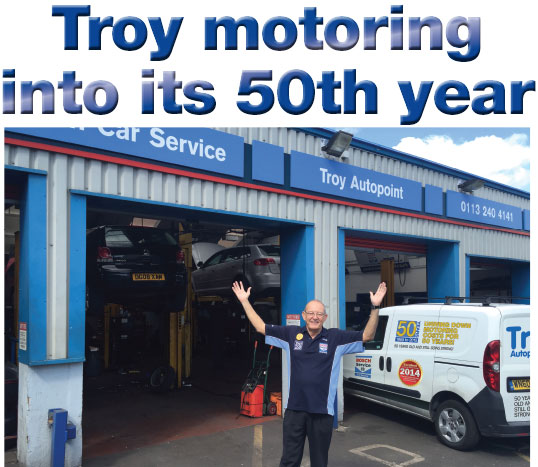 A YORKSHIRE business is celebrating its 50th anniversary in the motor industry this month.

At that time Mr Johnson had more enthusiasm than money. But what began as a small motor accessory shop on North Street, Leeds grew into a thriving empire of over ten stores and outlets in Yorkshire.

Half a century later Mr Johnson is still at the helm of the business. He counts his experienced and talented staff as Troy’s number one asset.

He said: “I’ve been lucky enough to work with some fantastic people. It’s uncommon now, that people stay in the same career all their lives, but for me there’s never been anything else I’d consider doing. “I’ve given 50 years of my life to this business and while it’s been hard work, I wouldn’t change a thing.”

Troy Autopoint has seen many changes since it opened its first store. Two years after opening the North Street store a presence in Headingley was established.

The business continued to expand and by the early 1990s Troy Autopoint was well established as a busy car servicing facility with a reputation as a leading supplier of car tyres in the Leeds area.

Despite the growth and 50 years on Troy still remains a family business, a fact that Mr Johnson is proud of.

He said: “I’m proud the business has stayed in the family, but really the whole staff feel like family now! All the senior staff have between 15 and 30 years’ motor industry experience, so I know our customers are in excellent hands.”.